From SEBoK
Types of Systems
Jump to navigation Jump to search

This article forms part of The Nature of Systems knowledge area (KA). It provides various perspectives on systemsystem classifications and types of systems, expanded from the definitions presented in What is a System?.

The modern world has numerous kinds of systems that influence daily life. Some examples include transport systems; solar systems; telephone systems; the Dewey Decimal System; weapons systems; ecological systems; space systems; etc. Indeed, it seems there is almost no end to the use of the word “system” in today’s society.

This article considers the different classification systems which some systems sciencesystems science authors have proposed in an attempt to extract some general principlesprinciples from these multiple occurrences. These classification schemes look at either the kinds of elementselements from which the system is composed or its reason for existing.

A taxonomy is "a classification into ordered categories" (Dictionary.com 2011). Taxonomies are useful ways of organizing large numbers of individual items so their similarities and differences are apparent. No single standard systems taxonomy exists, although several attempts have been made to produce a useful classification taxonomy, e.g. (Bertalanffy 1968) and (Miller 1986).

Kenneth Boulding (Boulding 1956), one of the founding fathers of general system theorygeneral system theory, developed a systems classification which has been the starting point for much of the subsequent work. He classifies systems into nine types:

These approaches also highlight some of the subsequent issues with these kinds of classification. Boulding implies that physical structures are closed and natural while social ones are open. However, a bridge can only be understood by considering how it reacts to traffic crossing it, and it must be sustained or repaired over time (Hitchins 2007). Boulding also separates humans from animals, which would not fit into more modern thinking.

Checkland refers to these five systems as comprising a “systems map of the universe”. Other, similar categorizations of system types can be found in (Aslaksen 1996), (Blanchard 2005) and (Giachetti 2009).

Magee and de Weck (Magee and de Weck 2004) provide a comprehensive overview of sources on system classification such as (Maier and Rechtin 2009), (Paul 1998) and (Wasson 2006). They cover some methods for classifying natural systems, but their primary emphasis and value to the practice of systems engineersystems engineer is in their classification method for human-designed, or man-made, systems. They examine many possible methods that include: degree of complexitycomplexity, branch of the economy that produced the system, realm of existence (physical or in thought), boundaryboundary, origin, time dependence, system statesstates, human involvement / system control, human wants, ownership and functional type. They conclude by proposing a functional classification method that sorts systems by their processprocess (transform, transport, store, exchange, or controlcontrol), and by the entity on which they operate (matter, energy, information and value). 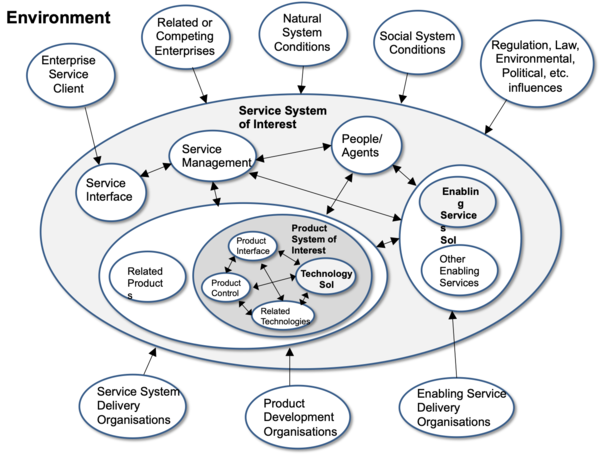 The word productproduct is defined as "a thing produced by labor or effort; or anything produced" (Oxford English Dictionary). In a commercial sense a product is anything which is acquired, owned and sustained by an organizationorganization and used by an enterprise (hardware, software, information, personnel, etc.).

A product systemproduct system is an engineered system in which the focus of the life cycle is to develop and deliver products to an acquireracquirer for internal or external use to directly support the delivery of services needed by that acquirer.

A product systems life cycle context will describe a technology focused SoI plus the related products, people and services with which the SoI is required to interact. Note, the people associated with a product system over its life (e,g, operators, maintainers, producers, etc.) sit outside of the product SoI, since they are not delivered as part of the product. However, to develop a successful product, it is essential to fully understand its human interfaces and influences as part of its context. The product context will also define the service systems within which it will be deployed to help provide the necessary capabilitycapability to the acquiring enterpriseenterprise.

A product life cycle may need to recommend changes to enabling services such as recruitment and training of people, or other infrastructure upgrades. Appropriate mechanisms for the implementation of these changes must be part of the agreement between acquirer and supplier and be integrated into the product life cycle. A product life cycle may also suggest changes in the wider context which would enhance the product’s ownership or use, but those changes need to be negotiated and agreed with the relevant owners of the systems they relate to before they can be added to the life cycle outputs.

A more detailed discussion of the system theory associated with product systems can be found in History of Systems Science and an expansion of the application of systems engineering to service systems in the Product Systems Engineering KA in Part 4.

A serviceservice can be simply defined as an act of help or assistance, or as any outcome required by one or more users which can be defined in terms of outcomes and qualityquality of service without detail to how it is provided (e.g., transport, communications, protection, data processing, etc.). Services are processes, performances, or experiences that one person or organization does for the benefit of another, such as custom tailoring a suit; cooking a dinner to order; driving a limousine; mounting a legal defense; setting a broken bone; teaching a class; or running a business’s information technologyinformation technology infrastructure and applications. In all cases, service involves deployment of knowledge and skills (competenciescompetencies) that one person or organization has for the benefit of another (Lusch and Vargo 2006), often done as a single, customized job. To be successful, service requires substantial input from the client and related stakeholder, often referred to as the co-creation of value (Sampson 2001). For example, how can a steak be customized unless the customer tells the waiter how the customer wants the steak prepared?

A service system life cycle may deliver changes to how existing products and other services are deployed and used. It may also identify the need to modify existing products or create new products, in which case it may initiate a related product life cycle. In most cases the service developer will not have full freedom to change all aspects of the service system context without some negotiation with related system element owners. In particular, people and infrastructure are part of the service context and changes to how system elements are used to provide desired outcomes are part of the service life cycle scope.

In a general service system context, it is not necessary to deliver all hardware or software products to the service provider. In some cases, some of the hardware, software or human elements may be owned by a third party who is not responsible for the service directly but provides enabling outputs to a number of such services. In other cases, the whole service may be provided by an organization that is completely separate to the enterprise which needs the service. Nor is it necessary for the exact versions of products or enabling services to be defined and integrated prior to service delivery. Some service system elements can be selected and integrated closer to the point of use. To allow for this late configuration of a service system, it will contain some method of discovery by which appropriate available elements can be found, and an overall service management element to implement and direct each instance of the service system. The use of a service system approach gives greater freedom for acquirers in how they obtain and support all of the capital equipment, software, people, etc. in order to obtain the capabilities needed to satisfy users.

Services have been part of the language of systems engineeringsystems engineering (SE) for many years, either as a way to describe the context of a product-focused life cycle or to describe commercial arrangements for the 'outsourcing' of product ownership and operation to others. The use of the term service systemservice system in more recent times is often associated with software configurable and information intensive systems, i.e.,

An enterpriseenterprise is one or more organizations or individuals sharing a definite mission, goals, and objectives to offer an output such as a product or service.

An enterprise systementerprise system consists of a purposeful combination (networknetwork) of interdependent resources (e.g., people; processes; organizations; supporting technologies; and funding) that interact with each other (e.g., to coordinate functions; share information; allocate funding; create workflows; and make decisions) and their environment(s), to achieve business and operational goals through a complex web of interactions distributed across geography and time (Rebovich and White 2011).

Enterprise systems are unique, compared to product and service systems, in that they are constantly evolving; they rarely have detailed configuration controlled requirements; they typically have the goal of providing shareholder value and customer satisfaction, which are constantly changing and are difficult to verify; and they exist in a context (or environment) that is ill-defined and constantly changing.

A product, service or enterprise context can be defined as a hierarchyhierarchy of system elements, with the additional definition of which elements are part of a SoI solution, which form the related problem context and which influence any life cycle associated with that context.

It is important to understand that the term SoS is an addition to the general concept of system hierarchy that applies to all systems. Maier examined the meaning of System of Systems in detail and used a characterization approach which emphasizes the independent nature of the system elements (Maier 1998, 268). Maier describes both independence in how a system element operates (e.g. an element in the SoI also has its own separate mission or is part of another SoI) and in how an element is developed or sustained (e.g. an element is made available, modified or configured by a different organization to the one responsible for the rest of the SoI).

From the discussions of product and service contexts above, it should be clear that they require similar systems understanding to be successful and that the difference between them is more about the scope of life cycle choices and the authority to make changes than about what kinds of systems they are.

These contexts are presented here as generalizations of the system engineering approach. All real projects may have both product and service system dimensions to them. In this general view of engineered systems, there is always an enterprise system directly interested in the service system context and either directly owning and operating any product systems and enabling services or gaining access to them as needed. This enterprise system may be explicitly involved in initiating and managing an engineering system life cycle or may be implicit in the shared ownership of a problem situation. Any engineered system context may have aspects of the SoS independence discussed above. This may be part of the context in the wider system or environment or it may be related to the choice of elements within the SoI.

A real SE life cycle typically combines different aspects of these general contexts into a unique problem and solution context and associated acquirer and supplier commercial relationships. These must be identified by that life cycle as part of its SE activities. More details of these different life cycle contexts are given in part 2 and their applications to SE practice are expanded upon in Part 4.

A good example of a general description of the above is given by Ring (1998), who defines the overall context as the Problem Suppression System, describes a cycle by which an enterprise will explore its current needs, uses these to identify one or more life cycle interventions and relevant organizations, then conduct and deliver those life cycles and integrate their outputs into the PSS; the enterprise can then review the results in the environment and begin the cycle again.

This general systems approach is described in part 2 and used as a focus to identify areas of foundational knowledge. The current practices of SE described in the rest of the SEBoK reference these foundations as appropriate.