This article describes the transformation of the systems engineering and integration program that produces the common combat system used across the United States Navy (USN) submarine fleet from traditional document-based systems engineering (DBSE) to model-based systems engineering (MBSEMBSE). The topic may be of particular interest to those dealing with programs in the sustainment and evolution phase of their life cycle. For additional information, refer to the links provided in Section V: Lessons Learned below.

Modern submarines are typically in service for 20 - 40 years. Submarines and their internal systems are typically state-of-the-practice at launch, but most navies find it necessary to upgrade the ship’s combat system at least once during the operational lifetime. The evolution of threats, technology and interoperability drives the USN to upgrade their submarine combat systems and key components including the sonar (Fages 1998) (Ford and Dillard 2009) and tactical control systems continuously (Jacobus and Barrett 2002).

Over the last three decades, submarine combat systems have evolved from multiple independent systems (sonar, combat control, imaging, electronic warfare, weapon control, etc.) with manual or point-to-point interfaces into networked federations of systems (FoS). Confusingly, these component systems are often referred to as subsystems in the literature. Typically, each new class of submarines has been equipped with a new combat system, with a corresponding logistics and sustainment tail unique to that class. 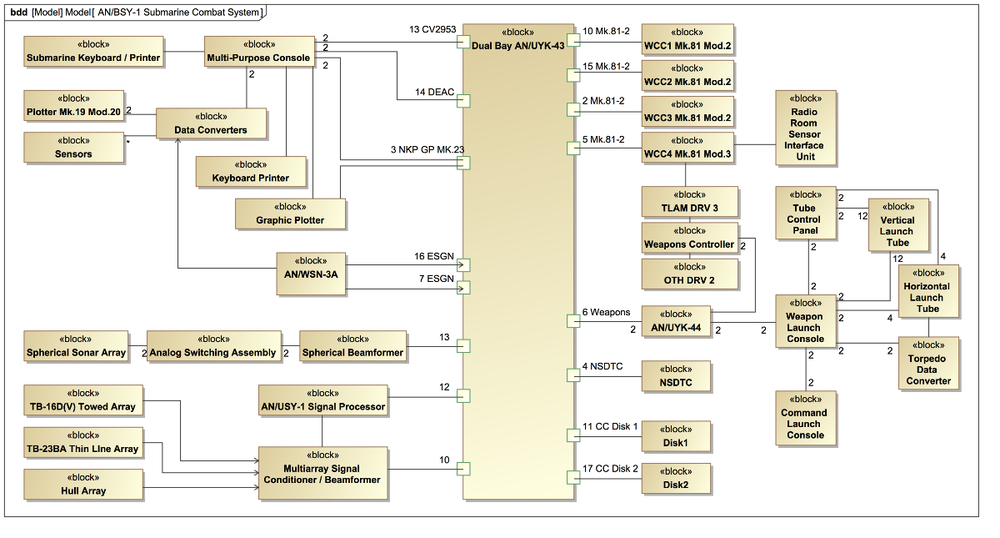 In the USN, each of these component systems has its own acquisition program, customer, and contractor team. Starting as legacy military systems hosted on traditional military-unique computational platforms, these systems have evolved to utilize Commercial Off-The-Shelf (COTS) computational and networking platforms, and leverage large amounts of COTS software.

As the component systems became more tightly interconnected, the acquisition customers established and collaboratively funded a systems engineering and integration (SE&I) program to manage the interfaces between systems, manage technology insertion and the obsolescence of common COTS hardware, and to integrate and test the production systems (Cooper, Sienkiewicz and Oliver 2006). Starting with the Virginia class, this SE&I program was expanded to encompass both new-production and in-service submarine modernization efforts. Over time, the combat systems of the various submarine classes were converged into variants of a single product line (Zingarelli et al. 2010). In addition, the independent system-to-system interfaces were rationalized where practical into common interfaces shared between multiple systems.

The submarine combat system SE&I program delivers an updated production baseline annually, along with product line variants for each submarine class or subclass being built or upgraded that year. Production systems implementing this baseline are delivered to new-build submarines, and to in-service submarines being upgraded on a roughly six-year cycle. The common combat system product line is referred to as the Submarine Warfare Federated Tactical Systems (SWFTS). SWFTS is deployed by the USN on submarines of the Los Angeles (SSN 688), Ohio (SSGN 726, SSBN 730), Seawolf (SSN 21), and Virginia (SSN 774) classes, and by the Royal Australian Navy on the Collins (SSG 73) class. SWFTS is also planned for the next-generation USN Columbia (SSBN) and RAN Future Submarine classes. Compared to the submarine combat systems that it replaced, SWFTS significantly reduces development, maintenance and training costs while delivering enhanced combat capabilities and facilitating the rapid insertion of new or improved capabilities (Zingarelli, et al. 2010). 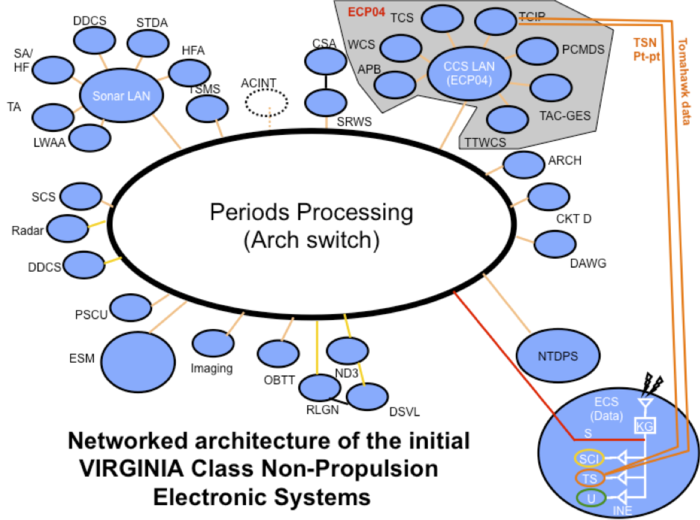 Figure 2. Contemporary submarine combat systems are networked with converged data interfaces (Produced by Lockheed Martin for US Navy. Approved for Public Release by US Navy, #16-348, June 2016)

SWFTS is a Federation of Systems (FoS), with each platform hosting a subset of 40 systems produced by 20 different program offices. As is common with System of Systems (SoS) and FoS, there is no central program office that can command the compliance of all of the component system programs. Instead, the evolution of SWFTS is executed through negotiation and consensus.

Like most other defense programs, the SWFTS SE&I program is under constant pressure to accomplish more with decreasing resources. There has been steady increase in SE scope despite decreasing budgets. Program leadership has responded in part through continuous SE process improvement. Improvements have included test automation, changes in the requirements management processes and tools (spreadsheets to IBM® Rational® DOORS® to OMG® SysML®), refined tooling for change management, and the DBSE to MBSE transition that is the focus of this case study. Substantial Return on Investment (ROI) has been achieved with each major SE process or tooling improvement (Mitchell 2014).

During 2009 the SWFTS SE&I program conducted a Model Driven Architecture (MDA) study to determine if MDA should be the next step in the program’s continuous SE process improvement. The MDA study predicted a positive Return on Investment (ROI) from converting to MBSE. In January 2010, the SWFTS SE&I program office initiated a three-year effort to develop and validate a SWFTS FoS model and MBSE process. In 2013, a SWFTS baseline was developed using both DBSE and MBSE in parallel. The DBSE products were used to validate the MBSE products. Based on that successful validation, the SWFTS SE&I program transitioned to MBSE for all ongoing work.

Until the transition in 2013, SWFTS SE was performed using traditional DBSE. Requirements were managed in DOORS, and reviewed and used by engineers in the form of massive spreadsheets with hundreds of columns and thousands of rows. The design of each variant was documented in Microsoft Office files. Baseline change requests (BCR) were documented in briefings and analyzed by all component system programs in parallel for potential impact. Approved BCRs were manually merged into DOORS and into revised baseline documents for each effected variant.

Starting in 2010, the customer community invested in a three-year MBSE transformation effort. The engineering team performed an in-depth tool trade study to select and set up the MBSE environment. That trade study resulted in the selection of MagicDraw™ for system modeling, using Teamwork™ as the model repository.

Once the modeling environment was installed, the MBSE transformation team architected, developed and populated a SysML-based model of the SWFTS FoS interfaces. The team updated the SWFTS SE process to take advantage of the new MBSE environment, with the constraint that the MBSE process produced SE products that were effectively identical to those produced by the DBSE process.

In 2013, the new MBSE environment and process was used to produce a set of SWFTS baseline SE products. In parallel, the DBSE process produced equivalent products. The two sets of baseline products were compared in detail, with all differences traced back to root causes.

This analysis identified a significant number of minor differences that were all traced to errors in the DBSE products. This validated the MBSE process and demonstrated that while those initial MBSE baseline products were more labor-intensive than the DBSE baseline products, the new MBSE process produced higher quality products. After this validation, the SWFTS SE&I program switched over to MBSE as their basic process.

Since that transformation, SE process improvement has continued apace. Requirements management has moved from DOORS to the system model in MagicDraw. As of 2016, the system model is the baseline for requirements, architecture and the FoS design. BCR impact analysis is now performed in model, leveraging capabilities of the toolset for automated assistance. Variants are documented in the system model as system configurations. Most SE products are generated from system model on demand.

While the initial scope of MBSE was limited to managing the interfaces between component systems, once the transition was successful, MBSE started expanding out to encompass additional SWFTS SE&I tasks. MBSE is now beginning to spread into the component system programs as well as the overall submarine combat system SE&I program.

Seven learning principles (LPs) (Friedman and Sage 2005) were derived that address the more broadly applicable areas of systems engineering knowledge and inform the areas of the SEBoK that are most strongly related to the case study. They are:

Requirements can be managed using the SysML language inside the system model quite effectively. This approach can reduce the resources needed to keep the system model in sync with a traditional requirements database system and increase overall SE productivity.

Having the architecture and design in a system model makes it affordable to generate specialized SE products on demand for particular communications needs while keeping all SE products in concordance. Even technical stakeholders who thought they understood the design can find new insights by looking at it in different representations.

Productivity LP3: MBSE increases productivity by enhancing communications within the team, automation of routine tasks, and cost avoidance. Processes used in DBSE often require substantial revision to achieve the potential productivity gains of MBSE. In particular, review processes must be modified to take advantage of the tooling.

Developing strong modeling style guidelines and specialized representations, along with training materials to indoctrinate new team members as they join the program, is worth the investment. MBSE does require a trained cadre of modelers, but not all systems engineers have to become skilled modelers.

To effectively quantify the benefits of MBSE, a program needs to plan metrics collection carefully, and then stick to the plan long enough to collect meaningful data.

Quality LP4: Much of the ROI from the MBSE transition can be in improved quality. Improving the quality of SE products reduces latent defects in systems delivered to the customer, reducing maintenance costs and increasing customer satisfaction.

Managing change LP5: How a proposed system change is understood and executed is fundamentally different between a model- and a document-centric approach. In the document-centric approach, the focus is on “What should my final output look like?” In the model-based approach, the focus is on “What does this change mean to the system? Which other parts of the system are impacted by this change?”

Change management is hard. When moving from DBSE to MBSE the approach must be carefully considered up front, and the system model must be designed to facilitate that approach. Change management also impacts tool selection, since different tools align better with different approaches.

Variant management is difficult. The planned approach must be considered up front, and the system model must be designed to accommodate it. The selected approach impacts tool selection and tailoring.

Life cycle LP7: MBSE can be applied early or late in the product family life cycle. While most projects using MBSE start off model-based, a program can transition to MBSE late in the life cycle.

Getting from DBSE to MBSE requires serious engineering, careful thought, planning and implementation. The SWFTS MBSE transition required three years of investment by the customer. That time and budget was spent primarily in designing and developing the system model and in re-engineering the SE processes.

Start the transition with carefully defined scope. Once that is accomplished, the scope of MBSE can be expanded from there.

Mitchell, S. W., ”Efficient management of configurations in the model-based system development of a common submarine combat system," A FCEA-GMU C4I Center Symposium on Critical Issues in C4I, 24-25 May 2011.