Overview of the Systems Approach

Many SE authors see a clear link between SE and systems thinking. For example, Hitchins (Hitchins 2007) describes generic models for the application of systems thinking to engineered system contexts. He suggests that these could form the foundation for descriptions and standards for the practices of SE. Hitchins also proposes a set of guiding principles which have been the foundations of SE, apparently since its inception (Hitchins 2009):

Hitchins considers principles A-D as pillars of SE that identify key aspects of systems thinking which should underpin the practice of SE. Principles E-G consider the dynamics of SE life cyclelife cycle thinking, the why, when and how often of SE.

Martin (Martin 2004) describes seven types of system, or “the seven samurai of systems engineering,”, all of which, system developers need to understand to develop successful systems:

Ring (Ring 1998) provides a powerful framework for the continuing management and periodic upgrade of long-life and “immortal” systems. It also accurately represents the “continuous” or very rapid product launch and refreshment cycle driven by market feedback and constant innovation that is seen in most product and service system consumer markets.

The article Identifying and Understanding Problems and Opportunities considers the nature of problem situations. It discusses the relationship between hard systemhard system and soft systemsoft system views of problems and how they relate to engineered systems. Engineered systems are designed to operate with and add value to a containing social and/or ecological system. The scope of problems is captured by frameworks, such as Political, Economic, Social, Technological, Legal and Environmental (PESTLE) (Gillespie 2007) or Social, Technical, Economic, Environmental, Political, Legal, Ethical and Demographic (STEEPLED).

The idea of a wicked problemwicked problem (Rittel and Webber 1973) is also discussed. These problems cannot be quantified and solved in a traditional engineering sense.

Sillitto (Sillitto 2010) describes a lifecycle model in which the decision as to what parts of problems can be “solved” and what parts must be “managed” is the first key decision and emphasizes the need for a solution approach that provides flexibility in the solution to match the level of uncertainty and change in the problem and stakeholder expectations. It is now normal to view a problem as one that "changes over time” and to promote the belief that value is determined by the perceptions of key stakeholders. 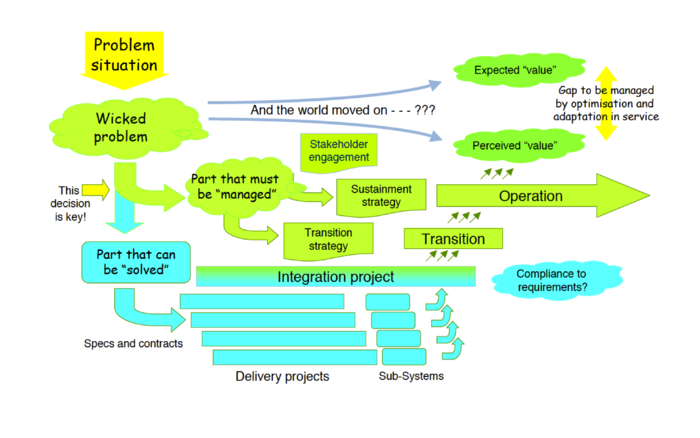 As discussed by Sillitto (Sillitto 2012), the methods and thinking applied by many practicing systems engineers have become optimized to the domains of practice. While systems thinking concepts, patterns and methods are used widely, they are not endemic in SE practice. As a result, SE practitioners find it difficult to share systems ideas with others involved in a systems approach. Part 4: Applications of Systems Engineering describes traditional (product based) SE (Lawson 2010) and examines this against the SE approaches that are applicable to service, enterprise, and system of systems capability. These approaches require more use of problem exploration, a broader solution context, and a purpose driven life cycle thinking.

The systems approach presented in the SEBoK uses the following activities:

When the systems approach is executed in the real world of an engineered system (glossary)engineered system (glossary), a number of engineering and management disciplines emerge, including SE. Part 3: Systems Engineering and Management and Part 4: Applications of Systems Engineering contain a detailed guide to SE with references to the principles of the systems approach, where they are relevant. Part 5: Enabling Systems Engineering provides a guide to the relationships between SE and the organizations and Part 6: Related Disciplines also offers a guide to the relationship between SE and other disciplines.