From SEBoK
Decision Management
Jump to navigation Jump to search

“…to provide a structured, analytical framework for objectively identifying, characterizing and evaluating a set of alternatives for a decision at any point in the life cycle and select the most beneficial course of action.”(ISO/IEC/IEEE 15288)

Decision situations (opportunitiesopportunities) are commonly encountered throughout a system’s lifecyclesystem’s lifecycle. The decision management method most commonly employed by systems engineers is the trade study. Trade studies aim to define, measure, and assess shareholder and stakeholderstakeholder valuevalue to facilitate the decision maker’s search for an alternative that represents the best balance of competing objectives. By providing techniques for decomposing a trade decision into logical segments and then synthesizing the parts into a coherent whole, a decision management process allows the decision maker to work within human cognitive limits without oversimplifying the problem. Furthermore, by decomposing the overall decision problem, experts can provide assessments of alternatives in their area of expertise. 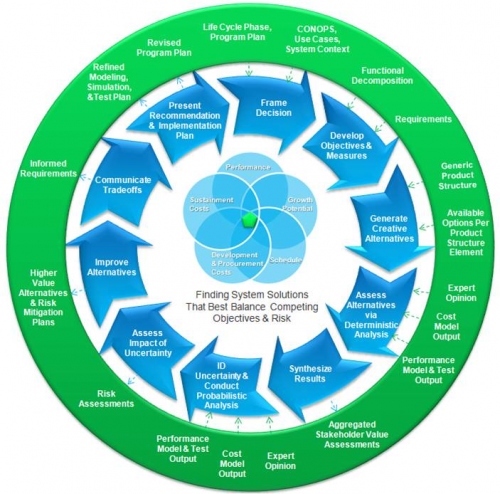 The center of the diagram shows the five trade space objectives (listed clockwise): Performance, Growth Potential, Schedule, Development & Procurement Costs, and Sustainment Costs . The ten blue arrows represent the decision management process activities and the white text within the green ring represents SE process elements. Interactions are represented by the small, dotted green or blue arrows. The decision analysis process is an iterative process. A hypothetical UAV decision problem is used to illustrate each of the activities in the following sections.

Framing and Tailoring the Decision

Defining how an important decision will be made is difficult. As Keeney (2002) puts it:

Most important decisions involve multiple objectives, and usually with multiple-objective decisions, you can't have it all. You will have to accept less achievement in terms of some objectives in order to achieve more on other objectives. But how much less would you accept to achieve how much more?

The first step is to develop objectives and measures using interviews and focus groups with subject matter experts (SMEs) and stakeholders. For systems engineering trade-off analyses, stakeholder value often includes competing objectives of performance, development schedule, unit cost, support costs, and growth potential. For corporate decisions, shareholder value would also be added to this list. For performance, a functional decomposition can help generate a thorough set of potential objectives. Test this initial list of fundamental objectives by checking that each fundamental objective is essential and controllable and that the set of objectives is complete, non-redundant, concise, specific, and understandable (Edwards et al. 2007). Figure 2 provides an example of an objectives hierarchy. 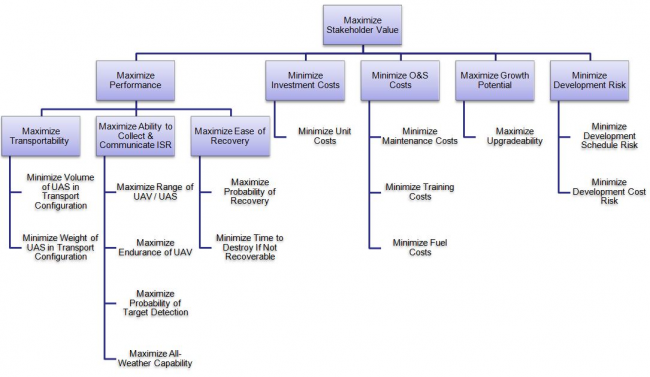 For each objective, a measure must be defined to assess the value of each alternative for that objective. A measure (attribute, criterion, and metric) must be unambiguous, comprehensive, direct, operational, and understandable (Keeney & Gregory 2005). A defining feature of multi-objective decision analysis is the transformation from measure space to value space. This transformation is performed by a value function which shows returns to scale on the measure range. When creating a value function, the walk-away point on the measure scale (x-axis) must be ascertained and mapped to a 0 value on the value scale (y-axis). A walk-away point is the measure score where regardless of how well an alternative performs in other measures, the decision maker will walk away from the alternative. He or she does this through working with the user, finding the measure score beyond, at which point an alternative provides no additional value, and labeling it "stretch goal" (ideal) and then mapping it to 100 (or 1 and 10) on the value scale (y-axis). Figure 3 provides the most common value curve shapes. The rationale for the shape of the value functions should be documented for traceability and defensibility (Parnell et al. 2011).

The mathematics of multiple objective decision analysis (MODA) requires that the weights depend on importance of the measure and the range of the measure (walk away to stretch goal). A useful tool for determining priority weighting is the swing weight matrix (Parnell et al. 2011). For each measure, consider its importance through determining whether the measure corresponds to a defining, critical, or enabling function and consider the gap between the current capability and the desired capability; finally, put the name of the measure in the appropriate cell of the matrix (Figure 4). The highest priority weighting is placed in the upper-left corner and assigned an unnormalized weight of 100. The unnormalized weights are monotonically decreasing to the right and down the matrix. Swing weights are then assessed by comparing them to the most important value measure or another assessed measure. The swing weights are normalized to sum to one for the additive value model used to calculate value in a subsequent section.

To help generate a creative and comprehensive set of alternatives that span the decision space, consider developing an alternative generation table (also called a morphological box) (Buede, 2009; Parnell et al. 2011). It is a best practice to establish a meaningful product structure for the system and to be reported in all decision presentations (Figure 5). 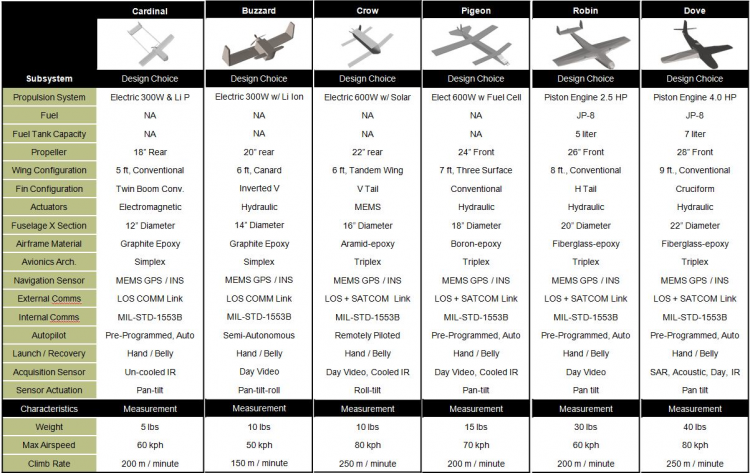 Figure 5. Descriptions of Alternatives (INCOSE DAWG 2013). Permission granted by Matthew Cilli who prepared image for the INCOSE Decision Analysis Working Group (DAWG). All other rights are reserved by the copyright owner.

With objectives and measures established and alternatives having been defined, the decision team should engage SMEs, equipped with operational data, test data, simulations, models, and expert knowledge. Scores are best captured on scoring sheets for each alternative/measure combination which document the source and rationale. Figure 6 provides a summary of the scores.

Figure 6. Alternative Scores (INCOSE DAWG 2013). Permission granted by Richard Swanson who prepared image for the INCOSE Decision Analysis Working Group (DAWG). All other rights are reserved by the copyright owner.

Note that in addition to identified alternatives, the score matrix includes a row for the ideal alternative. The ideal is a tool for value-focused thinking, which will be covered later.

Next, one can transform the scores into a value table, by using the value functions developed previously. A color heat map can be useful to visualize value tradeoffs between alternatives and identify where alternatives need improvement (Figure 7).

Figure 7. Value Scorecard with Heat Map (INCOSE DAWG 2013). Permission granted by Richard Swanson who prepared image for the INCOSE Decision Analysis Working Group (DAWG). All other rights are reserved by the copyright owner.

The additive value model uses the following equation to calculate each alternative’s value: 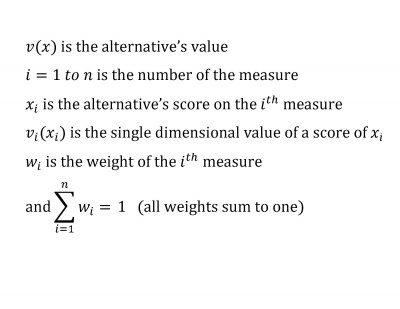 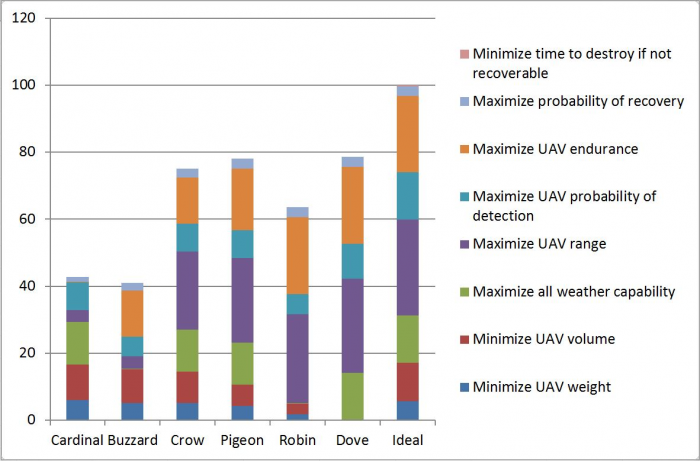 The heart of a decision management process for system engineering trade off analysis is the ability to assess all dimensions of shareholder and stakeholder value. The stakeholder value scatter plot in Figure 9 shows five dimensions: unit cost, performance, development risk, growth potential, and operation and support costs for all alternatives. 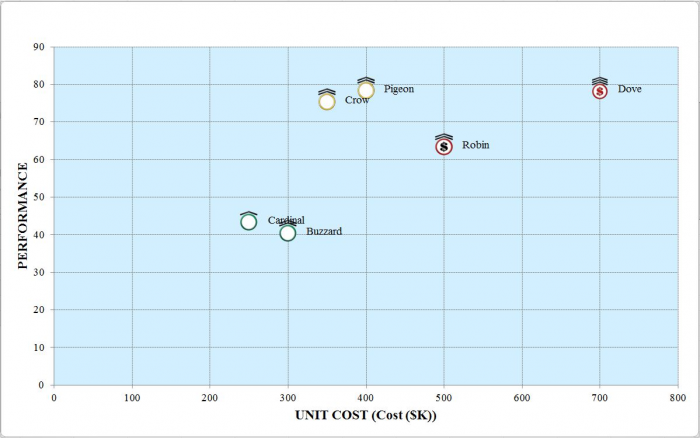 Figure 9. Example of a Stakeholder Value Scatterplot (INCOSE DAWG 2013). Permission granted by Richard Swanson who prepared image for the INCOSE Decision Analysis Working Group (DAWG). All other rights are reserved by the copyright owner.

Each system alternative is represented by a scatter plot marker (Figure 9). An alternative’s unit cost and performance value are indicated by x and y positions respectively. An alternative’s development risk is indicated by the color of the marker (green = low, yellow= medium, red = high), while the growth potential is shown as the number of hats above the circular marker (1 hat = low, 2 hats = moderate, 3 hats = high). 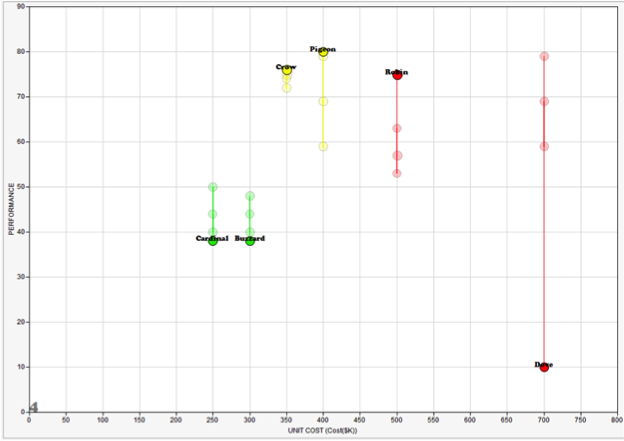 Figure 10. Uncertainty on Performance Value from Monte Carlo Simulation (INCOSE DAWG 2013). Permission granted by Matthew Cilli who prepared image for the INCOSE Decision Analysis Working Group (DAWG). All other rights are reserved by the copyright owner.

This is the point in the process where the decision analysis team identifies key observations about tradeoffs and the important uncertainties and risks.

It is often helpful to describe the recommendation(s) in the form of a clearly-worded, actionable task-list in order to increase the likelihood of the decision implementation. Reports are important for historical traceability and future decisions. Take the time and effort to create a comprehensive, high-quality report detailing study findings and supporting rationale. Consider static paper reports augmented with dynamic hyper-linked e-reports.

The Cognitive Bias Effect on Decisions

Research by (Kahneman 2011) and (Thaler and Sunstein 2008) has concluded that cognitive bias can seriously distort decisions made by any decision maker. Both Kahneman an Thaler were awarded the Nobel prize for their work. The cause of this distortion is called the cognitive bias (Glossary). These distorted decisions have contributed to major catastrophes, such as Challenger and Columbia. Other sources attributing major catastrophes are (Murata, Nakamura, and Karwowski 2015) and (Murata 2017).

(Kahneman 2011) and (Thaler and Sunstein 2008) have identified a large number of individual biases, the most well-known of which is the confirmation bias. This bias states that humans have a tendency to interpret new evidence as confirmation of one's existing beliefs or theories. Regarding mitigation of theses biases, there is general agreement that self-mitigation by the decision-maker is not feasible for most biases. (Thaler and Sunstein 2008) provide methods to influence the mitigation of most biases. They refer to these influences as “nudges”.

Considering cognitive biases in a systems engineering is discussed by (Jackson 2017, Jackson and Harel 2017) , and (Jackson 2018) . The primary theme of these references is that rational decisions are rarely possible and that cognitive bias must be taken into account.

According to (INCOSE 2015) ideal decisions are made while “objectively identifying, characterizing, and evaluating a set of alternatives for a decision…” Research in the field of behavioral economics has shown that these decisions can be distorted by a phenomenon known as cognitive bias. Furthermore, most decision makers are unaware of these biases. The literature also provides methods for mitigating these biases.

According to (Haselton, Nettle, and Andrews 2005, p. 2) a cognitive bias represents a situation in which “human cognition reliably produces representations that are systematically distorted compared to some aspect of objective reality.” Cognitive biases are typically stimulated by emotion and prior belief. The literature reveals large numbers of cognitive biases of which the following three are typical:

Various sources have suggested methods to mitigate the effects of cognitive bias. Following are some of the major ones.

Murata, A. 2017. "Cultural Difference and Cognitive Biases as a Trigger of Critical Crashes or Disasters - Evidence from Case Studies of Human Factors Analysis." Journal of Behavioral and Brain Science. 7:299-415.

Parnell, G.S. 2009. "Decision Analysis in One Chart," Decision Line, Newsletter of the Decision Sciences Institute. May 2009.

Felix, A. 2005. "How the Pro-Active Program (Project) Manager Uses a Systems Engineer’s Trade Study as a Management Tool, and not just a Decision Making Process." Proceedings of the International Council on Systems Engineering (INCOSE) International Symposium, July 10-15, 2005, Rochester, NY.

Miller, G.A. 1956. "The Magical Number Seven, Plus or Minus Two: Some Limits on Our Capacity for Processing Information." Psychological Review, 63(2), p.81.