From SEBoK
Systems Science
Jump to navigation Jump to search

This knowledge area (KA) provides a guide to some of the major developments in systems sciencesystems science, which is an interdisciplinary field of science that studies the nature of complexcomplex systemssystems in nature, society, and engineeringengineering.

This is part of the wider systems knowledge which can help to provide a common language and intellectual foundation, and make practical systems conceptsconcepts, principlesprinciples, patternspatterns and tools accessible to systems engineeringsystems engineering (SE) as discussed in the Introduction to Part 2.

Each part of the SEBoK is divided into KAs, which are groupings of information with a related theme. The KAs, in turn, are divided into topics. This KA contains the following topics: 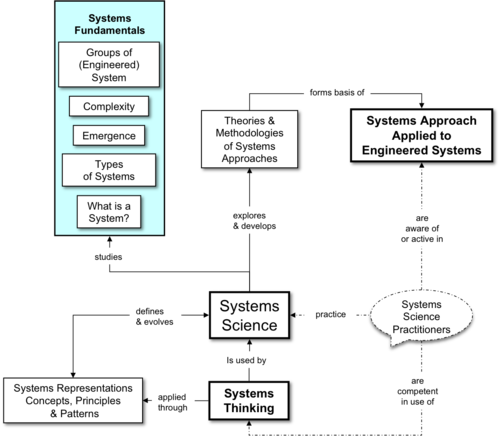 Systems science brings together research into all aspects of systems with the goal of identifying, exploring, and understanding patterns of complexitycomplexity which cross disciplinary fields and areas of application. It seeks to develop interdisciplinary foundations which can form the basis of theories applicable to all types of systems, independent of elementelement type or application; additionally, it could form the foundations of a meta-discipline unifying traditional scientific specialisms.

The History of Systems Science article describes some of the important multidisciplinary fields of research of which systems science is composed.

A second article presents and contrasts the underlying theories behind some of the system approachessystem approaches taken in applying systems science to real problems.

People who think and act in a systems way are essential to the success of both research and practice. Successful systems research will not only apply systems thinkingsystems thinking to the topic being researched but should also consider a systems thinking approach to the way the research is planned and conducted. It would also be of benefit to have people involved in research who have, at a minimum, an awareness of system practice and ideally are involved in practical applications of the theories they develop.