This knowledge area (KA) provides a guide to some of the most important knowledge about systemsystem engineering fundamentals. System Engineering benefits from systems thinkingsystems thinking in combination with an essential understanding of The Nature of Systems. It applies systems approaches to practicesystems approaches to practice grounded in systems sciencesystems science.

This is part of the wider systems knowledge, which can help to provide a common language and intellectual foundation and make practical systems conceptsconcepts, principlesprinciples, patterns and tools accessible to systems engineeringsystems engineering (SE) as discussed in Part 2: Foundations of Systems Engineering.

Each part of the SEBoK is divided into KAs, which are groupings of information with a related theme. The KAs, in turn, are divided into topics. This KA contains the following topics:

A concept is a mental representation that can be shared with a word or other media such as visualizations, pictures or displays of emotion (Daniel-Allegro B, Smith G.R. 2016). Systems Engineering Core Concepts provide the mental building blocks that when brought together can support an expression of principles. “A principle is a fundamental truth or proposition that serves as the foundation for a system of belief or behavior or for a chain of reasoning”. As an example, if you have three colors, red, blue, yellow (all words that serve as mental concepts). A principle is if you mix some yellow with some blue then you get green. A principle can provide guidance for acting with some certainty of the result. Principles learnt from practical experience that yet lack a scientific understanding as to the explanation of “why” are referred to as heuristicsheuristics. Often in the progression of science these observations of ‘what is happening’ form the starting point for asking the question ‘why does this happen’ and prompts research into the underpinning scientific theory.

The word system is a concept used in many areas of human activity and at many levels. But what do System Engineers mean when they use the word system? The answer is surprisingly not as simple as you might think.

(Sillitto, Griego et al. 2018) established in their research that there are at least seven distinct, and to a considerable extent mutually incompatible, worldviews on systems within a relatively small population of systems engineering experts in the INCOSE Fellows’ and System Science Working Group (SSWG) communities. The worldviews identified ranged from constructivist (“systems are purely a mental construct”) to “extreme realist” (“systems only exist in the real world”). Some considered the threshold of systemness” to be as simple as “two or more inter-related elements”; while others demanded a wide range of attributes, including those of living systems, before considering something to be a system.

That such a wide range of worldviews was discovered within the Systems Engineering community was a surprising result. We might expect to find an even wider range of worldviews across a more diverse community; but a non-rigorous examination of the results of the survey and of the wider literature suggests that the range of “system” worldviews held by the surveyed group of Systems Engineers is broadly representative of the systems field. In the 2019 IFSR conversation “What is System Science?” (Metcalf, G.S., M.C. Edson, and G. Chroust, 2018), it was concluded that there would be great benefit to achieve a synthesis across the apparently conflicting worldviews of constructivism and realism, expressed in terms of these two key aspects: a) the nature of systems in the physical universe; and b) the way humans perceive and interact with systems.

In practical terms, in the Introduction to Systems Engineering Fundamentals, the concepts of open systemopen system and closed systemclosed system are explored. Open systems, described by a set of elementselements and relationships, are used to describe many real world phenomena. Conceptually closed systems have no interactions with their environmentenvironment.

Some systems classifications, characterized by type of element or by purposepurpose, are presented.

An engineered systemengineered system is defined within the SEBoK as encompassing combinations of technology and people in the context of natural, social, business, public or political environments, created, used and sustained for an identified purpose. The application of the Systems Approach Applied to Engineered Systems requires the ability to position problemsproblems or opportunitiesopportunities in the wider system containing them, to create or change a specific engineered system-of-interestsystem-of-interest, and to understand and deal with the consequences of these changes in appropriate wider systems. The concept of a system contextsystem context allows all of the system elements and relationships needed to support this to be identified.

Two particular aspects of the system phenomena complexitycomplexity and emergenceemergence, are described in the System Science KA. Between them, these two concepts represent many of the challenges which drive the need for systems thinking and an appreciation of systems science in SE. In The Nature of Systems KA, a rich portrayal of the landscape of systems and the system phenomena is provided. 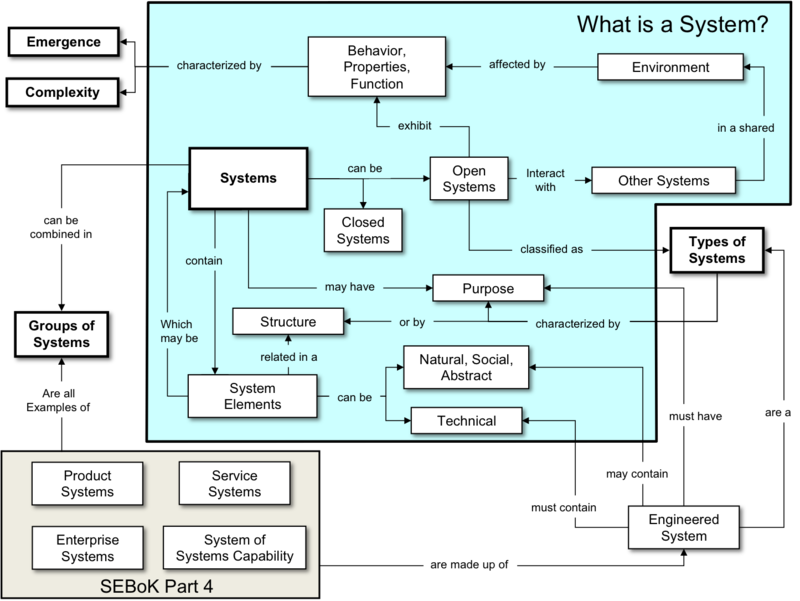 The details of how SE is applied to each of these contexts are described in Part 4: Applications of Systems Engineering.