From SEBoK
System Transition
Jump to navigation Jump to search

As part of system deployment, on-site installation, check-out, integration, and testing must be carried out to ensure that the system is fit to be deployed into the field and/or put into an operational context. Transfer is the process that bridges the gap between qualification and use; it deals explicitly with the handoff from development to logisticslogistics, operations, maintenancemaintenance, and support.

[The transition] process installs a verified system, together with relevant enabling systems, e.g., operating system, support system, operator training system, user training system, as defined in agreements. This process is used at each level in the system structure and in each stage to complete the criteria established for exiting the stage.

Thinking in a linear fashion, the system is transitioned into operation and then would be used and maintained in the operational environment. However, there are other views on transition. For example, the NASA Systems Engineering Handbook states that transition can include delivery for end-use as well as delivery of components for integration (NASA 2007). Using this view, transition is the mechanism for moving system components from implementation activities into integration activities. The NASA discussion of transition also implies that transition can include sustainment activities:

The act of delivery or moving of a product from the location where the product has been implemented or integrated, as well as verified and validated, to a customer.

Just as there are multiple views on the definition of transition and deployment, there are also several ways to divide the activities required for transition. For example, the NASA Systems Engineering Handbook definition of transition states: This act can include packaging, handling, storing, moving, transporting, installing, and sustainment activities (2007). However, the SEBoK includes the topic of sustainment as separate from transition; this is instead covered under the maintenance and logistics topics. The International Council on Systems Engineering (INCOSE) views the transition process as two-step: planning and performance. Though there are several processes for deployment and transition, most generally include the following activities:

Some common issues that require additional considerations and SE activities are the utilization or replacement of legacy systems. It is also common for an organization to continue testing into the early operational phase. The following activities support these circumstances:

A system may have to undergo reliability demonstration testing (RDT) to ensure that it meets its contractual R&M guarantees. RDT is conducted under actual field conditions, especially for large systems purchased in small quantity. During RDT, the system is operated in the field within stated test duration and all field data are systematically recorded. At the end of the test period, analysis of the RDT data is performed. Data analysis should facilitate determination of system reliability. One possible output of this analysis is shown in Figure 1 below. 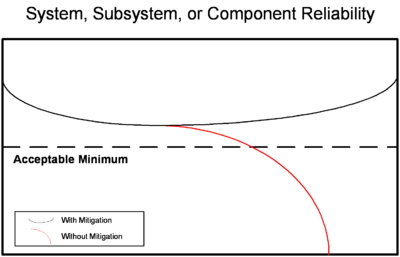