From SEBoK
Implementation Examples
Jump to navigation Jump to search

Characteristics of the organization(s) which perform SE have an impact on the engineering itself. It is for this reason that the examples are grouped into three categories: government examples, commercial examples, and examples which represent issues from both ("combined"). As the SEBoK continues to evolve, additional categorizations may be developed. A matrix is used to map the specific systems engineering principles illustrated in each example to the associated SEBoK topics.

The examples here have been developed by examining previously published case studies from external sources that demonstrate the real-world examples of systems engineering principles. These case studies were then summarized by the BKCASE team. The summaries include links to the original documentation as well as links to the relevant areas of the SEBoK highlighted in the example.

Systems engineering (SE) examples can be characterized in terms of at least two relevant parameters, viz., their degrees of complexity and engineering difficulty. Although a so-called quad chart is likely an oversimplification, a 2 x 2 array can be used to make a first-order characterization, as shown in Figure 1. 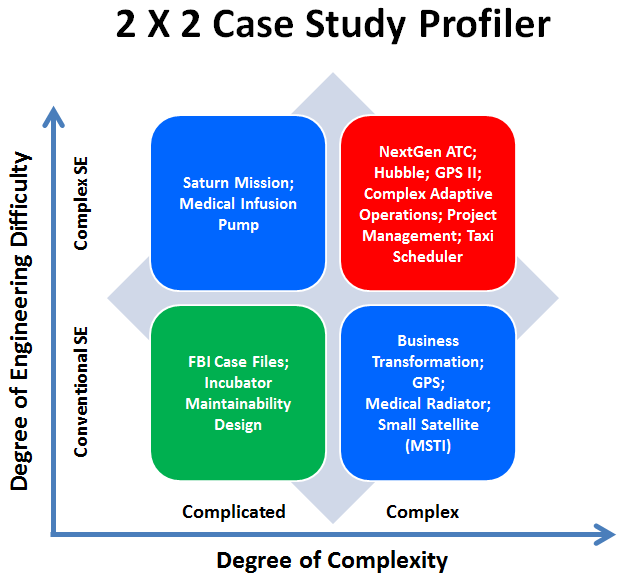 The x-axis depicts complicated, the simplest form of complexity, at the low-end on the left, and complex, representing the range of all higher forms of complexity on the right. The y-axis suggests how difficult it might be to engineer (or re-engineer) the system to be improved, using Conventional (classical or traditional) SE, at the low-end on the bottom, and Complex SE, representing all more sophisticated forms of SE, on the top. This upper range is intended to cover system of systems (SoS) engineering (SoSE), enterprise systems engineering (ESE), as well as Complex SE (CSE).The distinctions among these various forms of SE may be explored by visiting other sections of the SEBoK. In summary, the SEBoK case study editors have placed each case study in one of these four quadrants to provide readers with a suggested characterization of their case study's complexity and difficulty. For sake of compactness the following abbreviations have been used: