The Enterprise as a System

To enable more efficient and effective enterpriseenterprise transformation, the enterprise needs to be looked at “as a systemsystem,” rather than as a collection of functions connected solely by information systems and shared facilities (Rouse 2005 and 2009; Lawson 2010). What distinguishes the designdesign of enterprise systems from product systems is the inclusion of people as a componentcomponent of the system, not merely as a useruser/operator of the system.

It is worth noting that the concept of "service" systems also includes people in the system. The thoughts above do not take this into account, primarily since their perspectives come mainly from a product system experience. The practice of service systems engineering is relatively new and is an emerging discipline. For more information on this, see the articles on Service Systems Engineering.

The primary purpose of an enterprise is to create value for society, other stakeholders, and for the organizations that participate in that enterprise. This is illustrated in Figure 1 that shows all the key elements that contribute to this value creation process. These elements in the enterprise can be treated as a "system" and the processes, methods, and tools ESE can be applied.

There are three types of organizations of interest: businesses, projects, and teamsteams (see note 1). A typical business participates in multiple enterprises through its portfolioportfolio of projects. Large SE projects can be enterprises in their own right, with participation by many different businesses, and may be organized as a number of sub-projects.

Note 1. The use of the word “business” is not intended to mean only for-profit commercial ventures. As used here, it also includes government agencies and not-for-profit organizations, as well as commercial ventures. Business is the activity of providing goods and services involving financial, commercial, and industrial aspects. 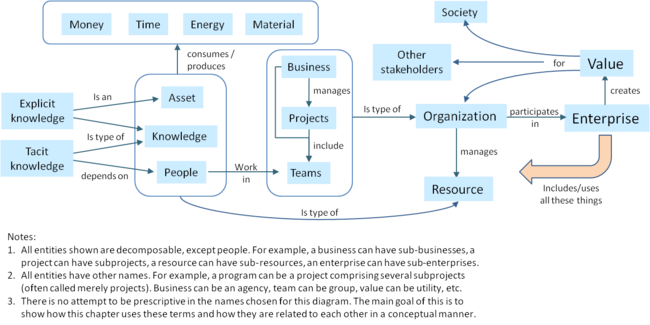 A key choice for businesses that conduct SE is to what extent, if at all, they seek to optimize their use of resources (people, knowledge, assets) across teams, projects, and business units. Optimization of resources is not the goal in itself, but rather a means to achieve the goal of maximizing value for the enterprise and its stakeholdersstakeholders. At one extreme, in a product-oriented organization, projects may be responsible for hiring, training, and firing their own staff, as well as managing all assets required for their delivery of products or services. (The term "product-oriented organization" is not meant in the sense of product-oriented SE, but rather in the sense of this being one of the basic constructs available when formulating organizational strategy.)

At the other extreme, in a functional organization, the projects delegate almost all their work to functional groups. In between these two extremes is a matrix organization that is used to give functional specialists a “home” between project assignments. A full discussion of organizational approaches and situations along with their applicability in enabling SE for the organization is provided in the article called Systems Engineering Organizational Strategy.

The optimization debate can be handled as described in the book called "Enterprise Architecture as Strategy" (Ross, Weill, and Robertson 2006). In other words, an enterprise can choose (or not) to unify its operations and can choose (or not) to unify its information base. There are different strategies the enterprise might adopt to achieve and sustain value creation (and how ESE helps an enterprise to choose). This is further addressed in the section on Enterprise Architecture Formulation & Assessment in the article called Enterprise Capability Management.

Enabling Systems Engineering in the Organization

Kinds of Knowledge Used by the Enterprise

Knowledge is a key resource for ESE. There are generally two kinds of knowledge: explicit and tacit. Explicit knowledge can be written down or incorporated in computer codes. Much of the relevant knowledge, however, is “tacit knowledge” that only exists within the heads of people and in the context of relationships that people form with each other (e.g., team, project, and business level knowledge). The ability of an organization to create value is critically dependent on the people it employs, on what they know, how they work together, and how well they are organized and motivated to contribute to the organization’s purpose.

The term “programprogram” is used in various ways in different domains. In some domains a team can be called a program (e.g., a customer support team is their customer relationship "program"). In others, an entire business is called a program (e.g., a wireless communications business unit program), and in others the whole enterprise is called a program (e.g., the Joint Strike Fighter program and the Apollo Space program). And in many cases, the terms projectproject and programprogram are used interchangeably with no discernible distinction in their meaning or scope. Typically, but not always, there are program managers who have profit and loss (P&L) responsibility and are the ultimate program decision makers. A program manager may have a portfolio of items (servicesservices, productsproducts, facilities, intellectual property, etc.) that are usually provided, implemented, or acquired through projects.

The Office of Government Commerce provides a useful distinction between programs and projects:

The ultimate goal of a Programme is to realise outcomes and benefits of strategic relevance. To achieve this a programme is designed as a temporary flexible organisation structure created to coordinate, direct and oversee the implementation of a set of related projects and activities in order to deliver outcomes and benefits related to the organisation’s strategic objectives...

A programme is likely to have a life that spans several years. A Project is usually of shorter duration (a few months perhaps) and will be focussed on the creation of a set of deliverables within agreed cost, time and quality parameters. (OGC 2010)

ESE, by virtue of its inherent trans-disciplinarity (Sage 2000, 158-169) in dealing with problems that are large in scale and scope, can better enable the enterprise to become more effective and efficient. The complexcomplex nature of many enterprise problems and situations usually goes beyond the abilities of standard tools and techniques provided to business school graduates (See also Complexity). ESE can augment the standard business management methods using the tools and methods from the SE discipline to more robustly analyze and evaluate the enterprise as a holistic system. A more general viewpoint, or “view,” for dealing with the enterprise consisting of scale, granularity, mindset, and time frame is provided by White (2007) and by McCarter and White (2009, 71-105).

The phrase "system of systemssystem of systems” (SoS) is commonly used, but there is no widespread agreement on its exact meaning, nor on how it can be distinguished from a conventional system. A system is generally understood to be a collection of elements that interact in such a manner that it exhibits behavior that the elements themselves cannot exhibit. Each element (or component) of the system can be regarded as a system in its own right. Therefore, the phrase “system of systems” can technically be used for any system and, as such, would be a superfluous term. However, the meaning of this phrase has been examined in detail by (Maier 1998, 267-284), and his definition has been adopted by some people (AFSAB 2005). Maier provides this definition:

A SoS is an assemblage of components which individually may be regarded as systems, and which possess two additional properties:

Maier goes on further saying that “the commonly cited characteristics of systems-of-systems (complexitycomplexity of the component systems and geographic distribution) are not the appropriate taxonomic classifiers” (Maier 1998, 267-284). Four kinds of SoS have been defined (Dahmann, Lane, and Rebovich 2008).

Different from the SoS concept, but related to it in several ways, is the concept called “federation of systems” (FoS). This concept might apply when there is a very limited amount of centralized control and authority (Sage and Cuppan 2001, 325-345; Sage and Rouse 2009). Each system in an FoS is very strongly in control of its own destiny, but “chooses” to participate in the FoS for its own good and the good of the “country,” so to speak. It is a coalition of the willing. An FoS is generally characterized by significant autonomy, heterogeneity, and geographic distribution or dispersion (Krygiel 1999). Krygiel defined a taxonomy of systems showing the relationships among conventional systems, SoSs, and FOSs.

This taxonomy has three dimensions: autonomy, heterogeneity, and dispersion. A FoS would have a larger value on each of these three dimensions than a non-federated SoS. An “Enterprise System,” as described above, could be considered to be an FoS if it rates highly on these three dimensions. However, it is possible for an enterprise to have components that are not highly autonomous, that are relatively homogeneous, and are geographically close together. Therefore, it would be incorrect to say that an enterprise is necessarily the same as an FoS.

Dove points out that in order for a large enterprise to survive in the twenty-first century, it must be more agileagile and robustrobust (Dove 1999 and 2001). Handy (1992, 59-67) describes a federalist approach called “New Federalism” which identifies the need for structuring of loosely coupledloosely coupled organizations to help them adapt to the rapid changes inherent in the Information Age. This leads to the need for virtual organizations where alliances can be quickly formed to handle the challenges of newly identified threatsthreats and a rapidly changing marketplace (Handy 1995, 2-8). Handy sets out to define a number of federalist political principles that could be applicable to an FoS. Handy’s principles have been tailored to the domain of systems engineering (SE) and management by Sage and Cuppan (2001, 325-345):

According to Maier’s definition, not every enterprise would be called a SoS since the systems within the enterprise do not usually meet the criteria of operational and managerial independence. In fact, one of the key purposes of an enterprise is to explicitly establish operational dependence between systems that the enterprise owns and/or operates in order to maximize the efficiency and effectiveness of the enterprise as a whole. Therefore, it is more proper to treat an enterprise system and an SoS as different types of things, with different properties and characteristics. This distinction is illustrated in the figure below, where three corresponding categories of SE are shown (DeRosa 2005; Swarz et al. 2006).

It is true that an enterprise can be treated as a system itself and is comprised of many systems within the enterprise, but this discussion will reserve the term SoS to those systems that meet the criteria of operational and managerial independence. This distinction was also used within the MITRE Corporation in their ESE Office (Rebovich and White 2011).

Figure 2. Different Groupings and Patterns Revealed at Different Scales (DeRosa 2005). Reprinted with permission of © 2011. The MITRE Corporation. All Rights Reserved. All other rights are reserved by the copyright owner.

Relationships between Enterprise and SoS

Figure 3. Relationships Between an Enterprise and SoSs (Martin 2010). Reprinted with permission of The Aerospace Corporation. All other rights are reserved by the copyright owner.

There is a general issue regarding dealing with enterprises in this situation: there are at least two enterprises related to any particular SoS. First, there is the enterprise of builders/developers comprising projects and programs, which have to be organized appropriately and adopt special types of architectural principles. Second, there is the enterprise of users (those who use the products and service provided by the first enterprise), which has to exercise its own sort of agility. How the first enterprise designs systems to allow the second to operate is the core issue.

Sage, A., and C. Cuppan. 2001. "On the Systems Engineering and Management of Systems of Systems and Federations of Systems." Information-Knowledge-Systems Management Journal. 2 (4): 325-345.