From SEBoK
Systems Lifecycle Approaches
Jump to navigation Jump to search
The printable version is no longer supported and may have rendering errors. Please update your browser bookmarks and please use the default browser print function instead.

Each part of the SEBoK is divided into knowledge areas (KAs), which are groupings of information with a related theme. The Kas, in turn, are divided into topics. This KA contains the following topics:

The term life cyclelife cycle is one that engineering has borrowed from the natural sciences; it is used to describe both the changes a single organism goes through over its life and how the lives of multiple organisms interact to sustain or evolve a population. We use it in engineering in the same ways to describe the complete life of an instance of a system-of-interestsystem-of-interest (SoI); and the managed combination of multiple such instances to provide capabilities which deliver stakeholder satisfaction.

A life cycle modellife cycle model identifies the major stagesstages that a specific SoI goes through, from its inception to its retirement. Life cycle models are generally implemented in development projects and are strongly aligned with management planning and decision making.

Figure 1 identifies the overall goals of any SE effort, which are: the understanding of stakeholder value; the selection of a specific need to be addressed; the transformation of that need into a system (the product or service that provides for the need); and the use of that product or service to provide the stakeholder value. This paradigm has been developed according to the principles of the systems approach discussed in Part 2 and is used to establish a basis for the KAs in Part 3 and Part 4 of the SEBoK. 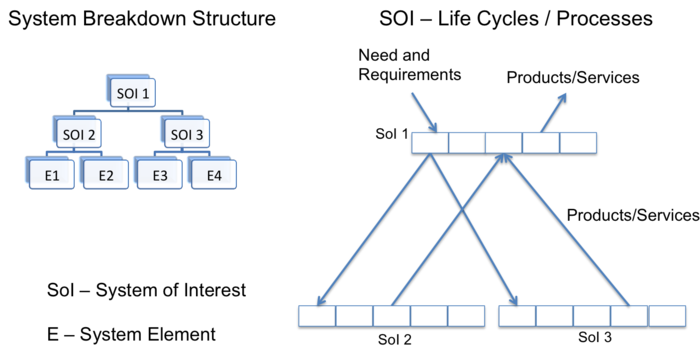 On the right side of Figure 1, each SoI has a corresponding life cycle modellife cycle model which is composed of stages that are populated with processes. The function of these processes is to define the work that is to be performed and the associated artifacts to be produced. In a model-based approach, these artifacts are captured in the system model that represents the SoIs. Note that some of the requirements defined to meet the need are distributed in the early stages of the life cycle for SoI 1, while others are designated to the life cycles of SoI 2 or SoI 3. The decomposition of the system illustrates the fundamental concept of recursionrecursion as defined in the ISO/IEC/IEEE 15288 standard; with the standard being reapplied for each SoI (ISO 2015). It is important to point out that the requirements may be allocated to different system elements, which may be integrated in different life cycle stages of any of the three SoI's; however, together they form a cohesive system. For example, SoI 1 may be a simple vehicle composed of a chassis, motor and controls, SoI 2 an embedded hardware system, and Sol 3 a software intensivesoftware intensive interface and control system. STOPPED HERE When performing SE processes in stages, iteration (glossary)iteration (glossary) between stages is often required (e.g. in successive refinement of the definition of the system or in providing an update or upgrade of an existing system). The work performed in the processes and stages can be performed in a concurrentconcurrent manner within the life cycle of any of the systems of interest and also among the multiple life cycles.

This paradigm provides a fundamental framework for understanding generic SE (seen in Part 3), as well as for the application of SE to the various types of systems described in Part 4.