Difference between revisions of "System Resilience"

From SEBoK
System Resilience
Jump to navigation Jump to search

Resilience is a relatively new term in the SE realm, appearing only in the 2006 time frame and becoming popularized in 2010. The recent application of “resilience” to engineered systems has led to confusion over its meaning and a proliferation of alternative definitions. (One expert claims that well over 100 unique definitions of resilience have appeared.) While the details of definitions will continue to be discussed and debated, the information here should provide a working understanding of the meaning and implementation of resilience, sufficient for a system engineer to effectively address it.

According to the Oxford English Dictionary on Historical Principles (OED 1973), resilience is “the act of rebounding or springing back.” This definition most directly fits the situation of materials which return to their original shape after deformation. For human-made or engineered systemsengineered systems the definition of resilienceresilience can be extended to include the ability to maintain capabilitycapability in the face of a disruptiondisruption. The US Department of Homeland Security defines resilience as "ability of systems, infrastructures, government, business, and citizenry to resist, absorb, recover from, or adapt to an adverse occurrence that may cause harm, destruction, or loss of national significance." (DHS 2017) Some practitioners define resilience only to include system reactions following an encounter with an adversity, sometimes called the reactive perspective. The INCOSE Resilient Systems Working Group (RSWG) recommends a definition that includes actions before the encounter with the adversity; this is called the proactive perspective.

The definition recommended by the RSWG is: resilience is the ability to provide required capability when facing adversity.

Scope of the Means

In applying this definition, one needs to consider the range of means by which resilience is achieved: The means of achieving resilience include avoiding, withstanding, and recovering from adversity. These may also be considered the fundamental objectives of resilience (Brtis and McEvilley 2019). Classically, resilience includes “withstanding” and “recovering” from adversity. For the purpose of engineered systems, “avoiding” adversity is considered a legitimate means of achieving resilience (Jackson and Ferris 2016). Also, it is believed that resilience should consider the system’s ability to “evolve and adapt” to future threats and unknown-unknowns.

Scope of the Adversity

Adversity is any condition that may degrade the desired capability of a system. Ideally, the systems engineer should consider all sources and types of adversity; e.g. from environmental sources, due to normal failure, as well as from opponents, friendlies and neutral parties. Adversity from human sources may be malicious or accidental. Adversities may be expected or not. Adversity may include "unknown unknowns." The techniques for achieving resilience discussed below are applicable to both hostile and non-hostile adversities. Notably, a single incident may be the result of multiple adversities, such as a human error committed in the attempt to recover from another adversity.

There are three objectives that reveal the intrinsic value of resilience:

Taxonomy Layer 2: Means Objectives that are not Ends in Themselves

Table 1 shows a set of objectives that are not as fundamental as those in layer 1, but enable achieving Layer 1's objectives:

Definitions of these terms are available in Brtis (2016) and Jackson and Ferris (2013).  The list of means objectives and architectural and design techniques will evolve as the resilience domain matures.

Techniques for the Civil Domain

34 techniques and support techniques for the civil domain described by Jackson and Ferris (2013) include both design and process techniques that will be used to define a system of interest in an effort to make it resilient. These techniques were extracted from many sources. Prominent among these sources is Hollnagel et al. (2006). Other sources include Leveson (1995), Reason (1997), Perrow (1999), and Billings (1997). Some techniques were implied in case study reports, such as the 9/11 Commission report (2004) and the US-Canada Task Force report (2004) following the 2003 blackout.

In the resilience literature the term technique is used to describe both scientifically accepted techniques and also heuristics, design rules determined from experience as described by Rechtin (1991). Jackson and Ferris (2013) showed that it is often necessary to invoke these techniques in combinations to best enhance resilience. This concept is called defense in depth. Pariès (2011) illustrates how defense in depth was used to achieve resilience in the 2009 ditching of US Airways Flight 1549.

Uday and Marais (2015) apply the above techniques to the design of a system-of-systems. Henry and Ramirez-Marquez (2016) describe the state of the U.S. East Coast infrastructure in resilience terms following the impact of Hurricane Sandy in 2012. Bodeau and Graubert (2011) propose a framework for understanding and addressing cyber-resilience. They propose a taxonomy comprised of four goals, eight objectives, and fourteen cyber-resilience techniques. Many of these goals, objectives, and practices can be applied to non-cyber resilience.

Techniques for the Military Domain

Brtis (2016) in the third level of his taxonomy discussed above identifies 23 engineering techniques for achieving resilience in the military domain. Jackson and Brtis (2017) have shown that many of the civil and military techniques are equivalent though some are unique to each domain.

The following information is often part of a resilience requirement:

Importantly, many of these parameters may vary over the timeframe of the scenario (see Figure 1). Also, a single resilience scenario may involve multiple adversities, which may be involved at multiple times throughout the scenario. 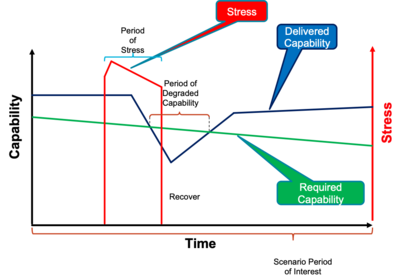 "Affordable Resilience" means to achieve an effective balance across Life Cycle Cost and Technical attributes of Resilience Engineering. This implies providing required capability when facing adversity in current and changing conditions as required to satisfy the needs of multiple stakeholders throughout a system's life cycle. Life cycle considerations for affordable resilience should address not only risks and issues associated with known and unknown adversities over time, but also opportunities for seeking gain in known and unknown future environments.

The priority of affordable resilience attributes for systems is typically domain-dependent; for example:

W.K. Viscusi (1995) describes tradeoff that balance risk and other system characteristics, including cost.

Two standards stand out for insight on resilience:

Humans are important components of systems for which resilience is desired. This aspect is reflected in the human in the loop technique identified by Jackson and Ferris (2013). Decisions made by the humans are at the discretion of the humans in real time. Apollo 11 described by Eyles (2009) is a good example.

Uday and Marais (2015) performed a survey of resilience metrics. Those identified include:

Jackson (2016) developed a metric to evaluate various systems in four domains: aviation, fire protection, rail, and power distribution, for the principles that were lacking in ten different case studies. The principles are from the set identified by Jackson and Ferris (2013) and are represented in the form of a histogram plotting principles against frequency of omission. The data in these gaps were taken from case studies in which the lack of principles was inferred from recommendations by domain experts in the various cases cited.

Brtis (2016) surveyed and evaluated a number of potential resilience metrics and identified the following:

Brtis found that multiple metrics may be required, depending on the situation. However, if one had to select a single most effective metric for reflecting the meaning of resilience, Brtis proposed that it would be the expected availability of the required capability.

Jackson, S., S.C. Cook, and T. Ferris, T. "Towards a Method to Describe Resilience to Assist in System Specification." Proceedings of the INCOSE International Symposium.