An engineered system solution to a defined concept includes a defined set of engineering elements, characteristics, and properties. These elements can be grouped by:

Architecture views include the identification of the boundary and interfaces of a system-of-interest (SoI), which may then be further refined as a collection of system elements and their relationships.

Requirements provide an overall view of the purpose and mission which the system as a whole is intended to satisfy, and a technology-independent view of that the system solutions(s) should do. They are conventionally organized into two types:

System requirements and stakeholder requirements are closely related. Neither can be considered complete until consistency between the two has been achieved, as demonstrated by traceability, for which a number of iterations may be needed.

The process activities to identify, engineer and manage system requirements are described further in the System Requirements article in the KA.

The boundary of the system architectures depends on what engineers include within the scope of the SoI and outside of it. This decision marks the transition from the characterization of the problem context to the beginings of solution definition. 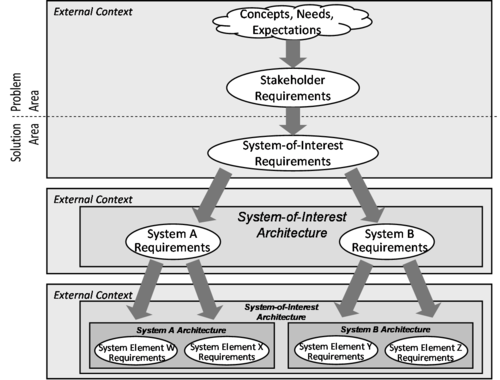 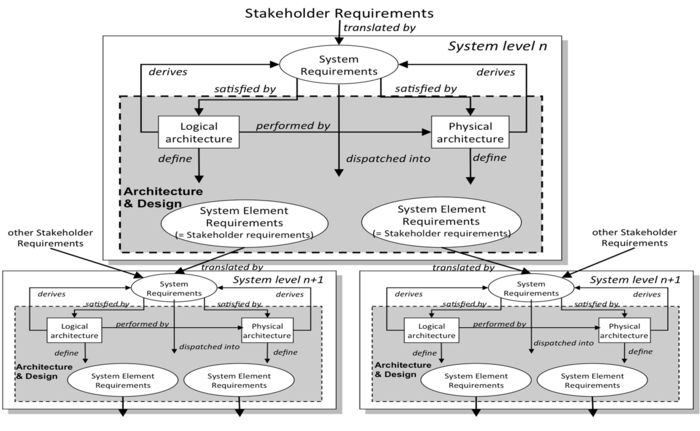 Within the SE community, notions of architecture seem to have been heavily influenced by ISO/IEC 15288 (2008), which even today presents a somewhat implicit view of architecture, conflating it with design as part of a single system life cycle process called architectural design. Although there are diverse viewpoints on architecture, the different perspectives have much in common. We consider systems engineering to cover all aspects of the creation of a system, including system architecture.

The majority of interpretations of system architecture are based on the fairly intangible notion of structure – i.e. relationships between elements.

Some authors limit the types of structure considered to be architectural; say, for example, restricting themselves to functional and physical structure. Recent practice has extended consideration to include temporal and other dimensions of structure within specified architectural frameworks (DoDAF (DoD 2010) and MODAF (MOD 2010)).

While architectural concepts are very useful and widely used in SE, there is a lack of consistency across communities of practice with potential for confusion. An attempt to develop and apply a systematic approach to characterizing architecture belief systems in systems engineering has been described by the INCOSE UK Architecture Working Group (Wilkinson et al.2010, Wilkinson 2010).

It was in light of complexity that structuring what composes a system became necessary. This structure explains the functional, behavioral, temporal, physical, and other aspects of a system as previously described. Practitioners found the term structure inadequate to describe all of these aspects of a system. The terms architecture and architectural design have been used for approximately 30 years, particularly in software intensive systems and in some domains such as the space industry. The set of different types and interrelated structures can be understood as the architecture of the system.

The trend today is to consider system architecture and system design as different sets of activities; attempts are made to define separate concurrent processes, but they are strongly intertwined:

The purpose of system design is to make the link between the system architecture (at whatever point this milestone is defined in the specific application of the systems engineering process) and the implementation of technological system elements that compose the physical architecture of the system.

(System Requirements and Logical Architecture share many characteristics: they are both organized on functional lines, independently of the implementation. Some authors (Stevens et al 1998) go so far as to conflate the two, which simplifies he handling of multiple simultaneous views. Whether this approach is adopted depends on the specific practices of the development organization and where contractual boundaries are drawn.)

Design decisions and technological solutions are selected according to performance criteria and non-functional requirements such as operational conditions and life cycle constraints (e.g., environmental conditions, maintenance constraints, realization constraints, etc.) as illustrated in Figure 3. Creating intermediate models such as logical architecture models enables facilitation of the validation of functional, behavioral, temporal properties of the system against system requirements which have no major technological influence, and changing during the life of the system the physical interfaces or the technological layer without completely questioning the logical functioning of the system. 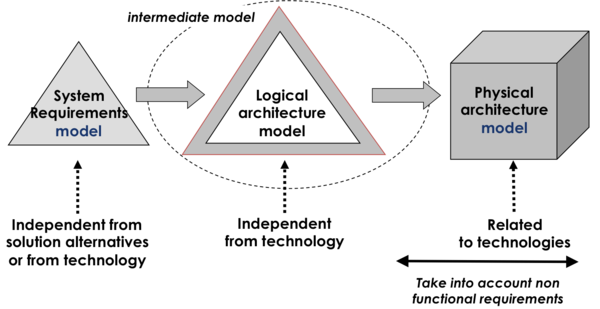 The concept of interface is one of the most important to consider when defining the architecture of a system. The fundamental aspect of an interface is functional and is defined as inputs and outputs of functions. As functions are performed by physical elements (system elements), inputs/outputs of functions are also carried by physical elements; these are called physical interfaces. Consequentially, both functional and physical aspects are considered in the notion of interface. A detailed analysis of an interface shows the function “send” located in one system element, the function “receive” located in the other one, and the function “carry" performed by the physical interface which supports the input/output flow (see Figure 5).

Systems engineers frequently utilize existing system elements. This re-use constraint has to be identified as a system requirement and carefully taken into account during architecture and design. One can distinguish three general cases when re-using system elements, as shown in Table 1.

There is a common idea that re-use is free; however, if not approached correctly, re-use may introduce risks that can be significant for the project (costs, deadlines, complexity).