General Systems Theory (GST) (von Bertalanffy 1968) considers the similarities between systems from different domains as a set of common system principles and concepts. The generally agreed upon systems science definition of a system is “a set of related elements that form an integrated whole.” A system exists in an environment which contains related systems and conditions:

This simple idea is then further elaborated through a set of principles and concepts. The following system principles, derived from GST, relate directly to the definition of a system:

These system principles and associated concepts, related to all kinds of systems, are described in more detail in the system concepts (glossary) knowledge area.

The world we live in has numerous kinds of systems that influence daily life. Some examples of the way the word system is used today in everyday society are transport systems, solar systems, telephone systems, the Dewey Decimal System, weapons systems, ecological systems, space systems, and so on; indeed it seems there is almost no end to the uses of the word “system” in today’s society.

Using the basic system science definition of a system , we can relate this to the real world through three related system domains as follows: 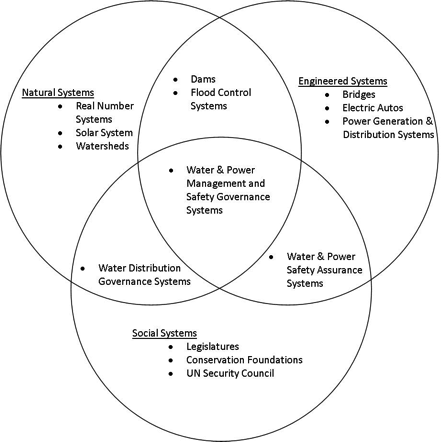 natural systems are real world phenomena to which we apply system thinking to help us better understand what they do and how they do it. A truly natural system would be a system we can observe and reason about, but over which we cannot exercise control, such as the solar system. As shown above, there are some managed natural systems which fall under the scope of one or both of the other domains. For engineered systems (ES) and social systems (SS), the best way to define the domain scope is to identify the types of systems for which we have authority to commit and manage resources for system creation and sustainment, as well as take responsibility for the results. Purely technical systems, such as bridges, electric autos, and power generation and distribution systems are exclusively in the ES domain, while purely human systems, such as legislatures, conservation foundations, and the United Nations (UN) Security Council are exclusively in the SS domain. These systems are purely human artifacts created to help us gain some kind of control over, or protection from, the real world. In System Science terms they are concrete, open Systems.

Systems common to both the SS and ES domains such as water and power management and safety governance systems, and water and power safety assurance systems, are often called sociotechnical systems . The systems common to the ES and NS domains such as dams and flood control systems might equally be termed as environ-technical systems, although the term sociotechnical is often extended to cover both. The behavior of such systems is determined both by the nature of the engineered elements, and by their ability to integrate with or deal with the variability of the natural and social systems in which they sit. The ultimate success of any engineered system is thus measured in its ability to contribute to the success of relevant socio (or enviro) technical systems.

How is system defined in the Systems Engineering literature? Systems Engineers generally refer to their system of interest as “the system,” and their definitions of “system” tend to characterize Engineered Systems.

The INCOSE Handbook generalizes this idea of an engineered system as: “An interacting combination of elements to accomplish a defined objective. These include hardware, software, firmware, people, information, techniques, facilities, services, and other support elements.” (INCOSE 2011).

However, engineered systems often find that their environment includes Natural Systems that don’t follow the definitions of “system” above, in that they have not been defined to satisfy a requirement or come into being to satisfy a defined objective. These include such systems as the solar system, if one’s engineered system is an interplanetary spacecraft. This has led to more general definitions of system, following the system science approach, such as the following (Aslaksen 2004):

This definition of system enables people to reason about numerous classes of dynamical systems that involve Engineered, Social and Natural Systems.

Fundamental properties of a system described in the Systems Engineering literature include togetherness, structure, behavior and emergence. These properties provide one perspective on what a system is: “We believe that the essence of a system is togetherness, the drawing together of various parts and the relationships they form in order to produce a new whole….” (Boardman and Sauser 2008). Hitchins (2009, 59-63) refers to this systems property as cohesion.

The joining together of various parts (elements) can be related either to the structure of a system or to the behavior of a system. The structure is the static existence of the system; namely its elements and their relationships, whereas the behavior refers to the effect produced when an instance of the system is in operation. The actual behavior produced in operation leads to the fundamental property of emergence as indicated in the following quotation: “Whole entities exhibit properties which are meaningful only when attributed to the whole, not to its parts ….” (Checkland 1999)

Natural Systems and Social Systems often form part of the environment in which Engineered Systems need to exist. For a Natural or Social System simply continuing to exist, and if appropriate to adapt and grow, are sufficient. Man made Engineered and Sociotechnical systems are created with a defined purpose (Hitchins, 2009). Thus, they must not only be able to exist within their environment, but also to do the thing necessary to achieve that purpose.

As can be seen from the discussion above, most attempts to define the term system either include in them assumptions about the system domain being considered, or are are attempts to take an a system science view. We need to make a clear distinction between defining "the system" to which we wish to apply a stsrems approach; and defining "systems" as an absract idea which we can use to help understand complex situations.

The reason we use the concept of a system is to help make sense of the complexity of the real world. This is done either by creating an abstract system to help explain complex situations, such as the real number system; by creating a standardized approach to common problems, such as the Dewey system; or by agreeing on a model of a new situation to allow it to be further explored, such as a scientific theory or conceptual system design. People use systems to make sense of complexity in an individual way, and when they work together to solve problems.

In the systems approach we may consider a number pf relevant systems to fully explore problems and solutions, and a given element may be included in several system views. Thus, it is less important that we can define “the system” than it is that we can use combinations of systems to help achieve engineeering or management tasks.

We use the idea of a system context to define an Engineered system of interest (soi) , and to capture and agree the important relationships between it, the systems it works directly with and the systems which influence it in some way. This Engineered System context relates to the system science ideas of an Open, Concrete System; although such a system may include Abstract system elements. There are a number of more detailed System Concepts such as Static/Dynamic, Deterministic/Non-Determicistic/Chaotic, Homeostatic, Complexity and Adaptation, Feedback and Control, etc. which the Systems Approach must also consider.

All application of a Systems Approach (and hence of Systems Engineering) are applied to an Engineered System Context, and not to an individual system.