Difference between revisions of "Economic Value of Systems Engineering"

Trends Toward Increasing the Value of Systems Engineering

With traditional projects, such as railroads, reservoirs, and refrigerators, a systems engineer faced a self-contained system that typically had relatively stable requirements, a sound scientific base, and numerous previous precedents. As most modern systems are intended to become parts within one or more evolving systems of systems (SoS), the performance of effective SE takes on an ever-higher economic value, as the systems feature a rapidly increasing scale, dynamism, interdependence, human-intensiveness, sources of vulnerability, and novelty.

This is corroborated by the Case Studies and Vignettes in Part 7. Shortfalls in SE lead to either extremely expensive cancelled systems or much more expensive systems in terms of total cost of ownership or loss of human life, as illustrated by the problems in the United States Federal Aviation Administration (FAA) Advanced Automation System (AAS), United States Federal Bureau of Investigation (FBI) Virtual Case File System, the Hubble Space Telescope, the Boeing 787 Dreamliner, and the Therac-25 medical linear accelerator. On the other hand, the Global Positioning System (GPS), Miniature Seeker Technology Integration Project (MSTI), and Next Generation Medical Infusion Pump Project all demonstrate that investment in thorough SE results in highly cost-effective systems. Figure 1 summarizes the analyses data by Werner Gruhl, which relates investment levels in SE to cost overruns of the United States National Aeronautics and Space Administration (NASA) projects (Stutzke 2005). The results indicate that there is a general correlation between the amount invested in SE within a program and cost overruns, demonstrating the critical role of properly allocating SE resources. 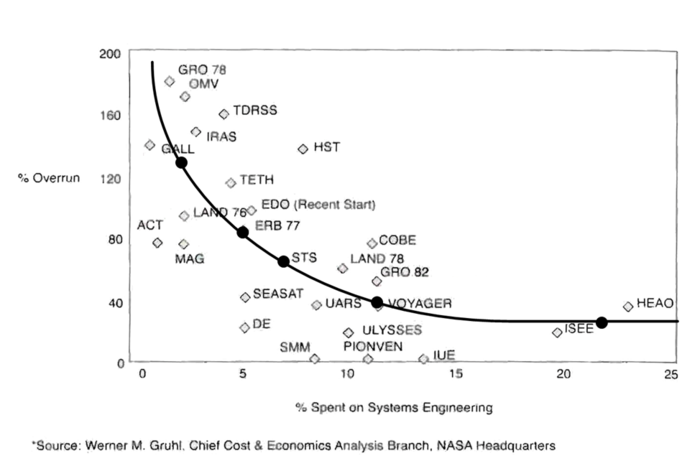 Further Quantitative Evidence of the Value of Systems Engineering

Analysis of the effects of shortfalls in systems architecture and risk resolution (the results of insufficient SE) for software-intensive systems in the 161-project Constructive Cost Model II (COCOMO™ II) database, shows a statistically significant increase in rework costs as a function of project size measured in source lines of code (SLOC): averages of 18% rework for ten-thousand-SLOC projects and 91% rework for ten-million-SLOC projects. This data has influenced many major system projects to reconsider initial underinvestment in SE (e.g., Boehm et al. 2004), and well as to address “how much SE is enough” by balancing the risks of under-investing in SE against those of over-investing (often called “analysis paralysis”), as shown in Figure 2 (Boehm, Valerdi, & Honour 2008). 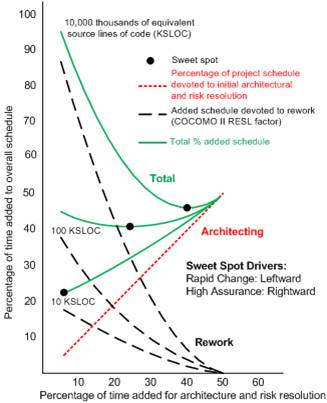 Figure 2. Risk-Balanced “How Much SE Is Enough” (Boehm, Valerdi, Honour 2008). Reprinted with permission of John Wiley & Sons Inc. All other rights are reserved by the copyright owner.

Survey data on software cost and schedule overruns in My Life Is Failure: 100 Things You Should Know to Be a Better Project Leader (Johnson 2006) indicates that the primary sources of the roughly 50% of the commercial projects with serious “software overruns” are the result of shortfalls in SE (lack of user input, incomplete requirements, unrealistic expectations, unclear objectives, and unrealistic schedules). The extensive survey of 46 government-contracted industry projects conducted by the Software Engineering Institute (SEI)/National Defense Industrial Association (NDIA) illustrated a strong correlation between higher project SE capability and higher project performance (Elm et al. 2007). Ongoing research that combined project data and survey data reported in “Toward an Understanding of The Value of SE” (Honour 2003) and “Effective Characterization Parameters for Measuring SE” (Honour 2010) has provided additional evidence as to the economic value of SE and further insights on critical factors the affect SE success.

A calibrated model for determining “how much SE is enough” has been developed and is discussed in (Valerdi 2008) called [COSYSMO][1] (Constructive Systems Engineering Cost Model). It estimates the number of person-months that a project needs for SE as a function of system size (i.e., requirements, interfaces, algorithms, and operational scenarios), modified by 14 factors (i.e., requirements understanding, technology risk, personnel experience, etc.), which dictates the amount of SE effort needed. Other economic considerations of SE include the costs and benefits of reuse (Wang, Valerdi & Fortune 2010), the management of SE assets across product lines (Fortune & Valerdi, 2013), the impact of SE on project risk (Madachy & Valerdi 2010), and the role of requirements volatility on SE effort (Pena & Valerdi 2010).

Honour, E.C. 2003. "Toward An Understanding of The Value of Systems Engineering." Proceedings of the First Annual Conference on Systems Integration, March 2003, Hoboken, NJ, USA.

Johnson, J. 2006. My Life Is Failure: 100 Things You Should Know to Be a Better Project Leader. Boston, MA, USA: Standish Group International.

Johnson, J. 2006. My Life Is Failure: 100 Things You Should Know to Be a Better Project Leader. Boston, MA, USA: Standish Group International.